Keeping it simple pays off for SA dairyfarmer 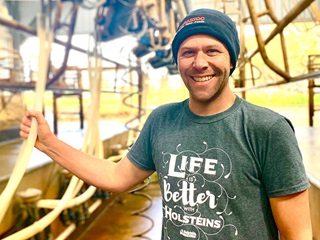 A singular focus on the health and happiness of cows has paid off for Strathalbyn farmer Brett Fiebig, who has just been been listed in the top five per cent of producers in the 2020 Australian Milk Quality Awards. The awards recognise the farms with the highest milk quality in Australia based on bulk milk cell count (BMCC).

For just under four years, Brett has been leasing 240 acres of dry land milking between 100 to 130 cows all year round. Prior to this he was sharefarming with his parents in Mt Gambier for six years.

“After starting my own dairy farming business in 2017  – and leasing the owners cows – I have since bred up my own numbers of registered animals to the point where I no longer need to lease cows,” Brett explained.

“This has resulted in a younger herd of cows which has led to a higher quality cell count”.